INTRODUCTION
This research blog looks at team leadership at various organizational levels. The research draws on 976 teams from 236 unique organizations in which the rank of the leader was known. Table 1 summarizes this database. 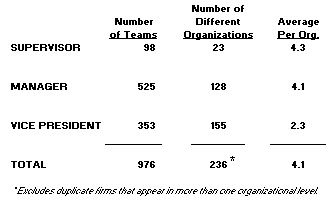 A host of different societal and economic sectors are represented in the research base. Table 2 summarizes these interest areas.

The wide distribution of categories, large number of teams and variety of firms suggest that this is a realistic sample. It can be trusted as reasonably representative of teams and their leadership.
TEAM LEADER PROFILE
“I Opt” strategic styles measure short-term decision preferences. Other entries in this research blog and www.iopt.com define styles in more detail. Generally, they represent different positions on the input>process>output continuum.

Table 1 identifies the leader’s dominant strategic style in terms of relative strength. In other words, it measures the relative reliance the leader puts on each “I Opt” style.

Once access is gained, the game changes. The reliance on the analytical HA strategy drops from about 31% to 20% (p~.05 significance). It appears that a strategy that gains access may not be ideal for advancement.

The RI style seems to be the favored strategy for those moving from manager to Vice President. The move from 34% to 44% reliance on RI is highly significant at p<.001. This is no accident. Some systematic process appears to be operating.

In summary, the idea-oriented RI style dominates the personal preference of team leaders. The analytical HA is a close second for the entry-level supervisor. But the HA importance quickly evaporates with increasing rank. The option-generating RI would seem to offer a key competitive advantage in team leadership.

LEADER VERSUS OTHER TEAM MEMBERS
A leader’s preference for a particular style is a personal, not organizational quality. For example, a leader may prefer RI over other “I Opt” styles. But other team member’s RI strength might exceed that level. Is just a having a dominant RI style enough?

Table 4 answers this question by comparing the leader’s style strength to that of other team members.

The average team size in this sample is 9.2 people. If chance alone were responsible for the leader having the highest strength in a style we would expect it to occur only about 1/9.2 = 10.8% of the time. The LP and HA styles fall within that range. The RI and RS styles (see red arrows) clearly exceed chance. The selection mechanism is operating on an organizational as well as personal level.

The next likely question is how important is this finding. In other words, how much does having the highest strength in a particular style improve the odds of gaining a leadership position?

The advantage is best measured by focusing on the big picture. Table 5 shows the actual versus expected number of teams whose leader had the highest “I Opt” style strength in any category (i.e., RS; LP; HA or RI).

Table 5
CALCULATING THE ADVANTAGE
LEADERSHIP POSITION BY NUMBER OF TEAMS

Table 5 says that in a group of 976 teams a person would have a 130-instance advantage if one or another of their “I Opt” strategic styles ranked as the highest within the team. This translates into a 13% advantage (130/ 976=13.3%). This is a conservative estimate. Using the RI and RS as a standard would yield a higher percent. But “do no harm” is a good principle. A conservative estimate minimizes any exposure.

In summary, team leaders tend to favor the RI and RS strategies on a personal level (see Table 3). They also tend to excel other team members in the strength with which they hold these styles (see Table 4). The degree and structure of the difference is enough to suggest that result is due to some kind of systematic competitive advantage.

The advantage is about 13%. This is enough to pay attention to but not enough to compel. There are other ways to gain and keep team leadership. Investing in them may yield an advantage equal to or greater than the gain from altering “I Opt” strategic styles. This research can be used to improve those odds even further. It is not a panacea but it can make a substantial contribution.

TEAM DIVERSITY
A question might arise whether there is some influence being exerted by the character of the teams at the various levels. One of these factors is the diversity of “I Opt” strategic profiles among team members. Chart 1 shows the diversity distribution by rank of the leader. 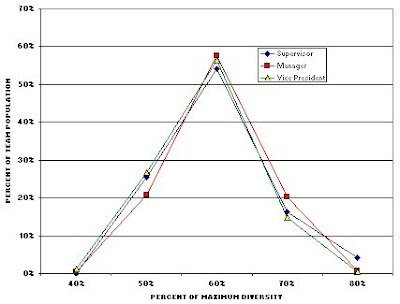 The “I Opt” Diversity Index measures the range profiles represented on a team. High diversity suggests that the team will naturally consider a wider variety of options. The cost is more decision-making difficulty.

There is a statistically significant difference between managers and Vice Presidents (p<.01) but its magnitude is trivial. Team leaders at all levels face essentially the same level of diversity in the teams that they lead. Diversity does not appear to be a basis for the relationships discovered.

TEAM SIZE
The more people on a team, the more opportunity for diverse positions. The Diversity Index in Chart 1 adjusts for this condition. Chart 2 shows the team size distribution by rank more directly. 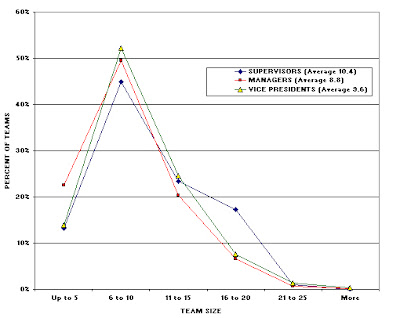 The differences between supervisors and managers are statistically significant (p<.001) as is manager and Vice President (p<.01). However, it is obvious that the team size differences are not of meaningful consequence. Team size seems to be reasonably constant across the ranks. It is unlikely to account for the relationships discovered. 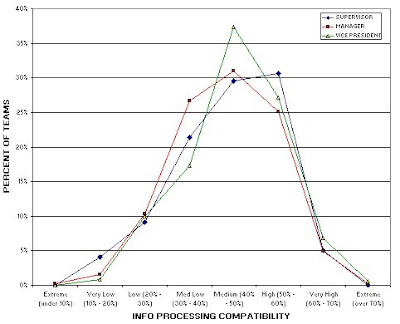 The similarity of the distributions is again striking. There is a statistically significant difference between manager and Vice President (p<.05) but it is of minimal consequence. This is perhaps better seen in Table 6.

A 30% to 50% overlap is in the moderate range of structural compatibility. This range has been repeatedly confirmed as “normal” across the many aspects of human interaction. The 45% compatibility found in here offers no basis to account for differences found.


MISSION ALIGNMENT
The first requirement for getting a leadership position is to be noticed. The spontaneous RI and RS styles tend to be more easily noticed that the more methodical HA and LP. Alternatively, compatibility with higher management levels might be seen as reason. Other entries in this research blog have shown that higher ranks tend to favor RI and RS styles. It could be argued that people appoint team leaders who are like them.

Both of the above positions may explain why people with certain strategic styles are given a chance at leadership. They do not explain why they endure in that position. The leaders of the large number of teams in this research are unlikely to be all new appointees. The source of team leadership preference must be found elsewhere.

Some insight might be gained by looking at the raw “I Opt” scores in each rank. The flow of the change in styles may provide a clue as to what is going on. This flow is shown in Table 7.

At a supervisor level the RI strategic style is dominant. But the LP and HA styles are almost equal to it. These methodical styles are well suited to handling specifics in an accurate and timely fashion. The mission of most supervisory teams is either processing specifics or improving the methods by which they are processed.

If this is an accurate characterization the implications are clear. The strength of the LP and HA are just as important to supervisory success as a dominant RI. Leadership development initiatives that cause these disciplined strategies (i.e., LP and HA) to be diminished among aspiring leaders can do damage.

At the manager level, the action oriented RS absorbs a decline in the LP and HA strategic styles. The idea-oriented RI also increases but only by a small amount. Teams at this level tend to be focused on functional missions. Specifics tend to be subordinated to tactical directions. Functions often must be discharged within a defined time frame. This mission is well served by the action-oriented RS style.

Leadership development initiatives guiding supervisors toward managerial positions will do well by focusing on decisive action. The ability to act in the face of uncertainty will need to be fostered. A capacity to work with fewer specifics and less detail will become important. These and other aspects of RS behavior can and should be developed.

Table 8 focuses on the change in “I Opt” profile between manager and Vice President. The green arrows show a further decline in both LP and HA. However this time the shift to the idea-oriented RI is more pronounced.

At a Vice Presidential level the manager’s functional interest gives way to a mission focus. VPs are concerned about long run postures and objectives. The number of decision variables, the level of uncertainty and number of options explode with the lengthening of the decision horizon. The RI strategy is ideally suited to navigate this environment.

The RI strategy is NOT “out of the box” thinking. That is an analytical exercise. It is “no box” thinking. The box is created along with the relationship between the dots that make up the box. The RI creates ideas totally outside of the boundaries of the known.

Leadership training can foster the development of this capacity. The ability to create theories “on the fly” is part of it. Exercises in relating unrelated things is another. Internships in strong RI environments are a third.

In summary, it appears that strategic style differences by rank are explainable. They probably rest on the nature of the job. The driving factors appear to involve lengthening decision horizons and diminishing level of specificity. The different “I Opt” strategic styles found in this research appear to align with the demands of these various levels.


SUMMARY
This research has shown systematic differences in strategic styles at different leadership levels. Overall, the Relational Innovator approach seems to be favored at all levels. But the relative strength differs.

Transitioning from one level to another is not a simple process of adding RI capacities. Different levels appear to require different mixes of the four basic “I Opt” styles. To be maximally effective, leadership development in both universities and corporate training groups should understand and accommodate these different needs.

This research has identified and traced the impact of these rank-based style differences. Recognizing and adjusting for them can produce better team performance from leaders who are better able to lead. It also serves the interest of the leaders themselves. They can better prepare themselves for the changes that will accompany their rise in rank.

The investment needed to adapt leadership training to the findings of this research is small. The return to both the organization and individuals could be large. This research is worth serious consideration.